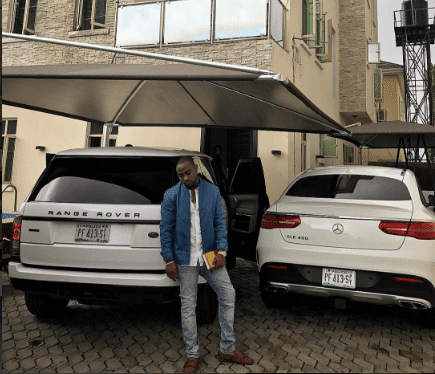 David Adedeji Adeleke who is popularly known as Davido was born on the 21st November 1992. The Nigerian superstar Davido, is an American-born Nigerian recording artist, performer, and a record producer all to his credit. In 2011, Davido released a single hit titled (Dami Duro) which was hugely loved and accepted in Nigeria at large, coupled with his elder brother in the name of Adewale Adeleke, The promising star boy davido is said to be the co-owner of HKN Music (a record label home to Sina Rambo, B. Red and DeeKay).
Davido has so far, produced songs for Naeto C, Skales, Tiwa Savage and Sauce Kid respectively. One huge reason why Davido is rich today was his signed endorsement deal with MTN Nigeria In April 2012, and on the 23rd Oct 2013, Davido partnered with Guinness Nigeria which also includes “Guinness World of More” concert.
Also Read: Ini Edo biography, Networth, House and Cars

Davido was born in Atlanta, Georgia, and spent his early life in Atlanta. The superstar, however, discovered that his calling is in Music and decided to relocate to Lagos at a very young age. His debut album: Omo Baba Olowo, which was released in 2012 and also supported by the singles.

Davido and the Sony Music Deal

The superstar announced In January 2016 through his twitter account, that he has signed a record deal with Sony Music.
Although, Davido’s announcement was met with mixed reactions, the Sony Record label, which has signed the world biggest superstars, like Late Pop King, Michael Jackson, put up a press conference, confirming the deal, and shutting the mouth of critics. Without wasting much time, Davido started his own label, Worldwide (DMW), after signing with Sony, a few months later; Dremo and Mayorkun signed to the label. Then In July 2016, Davido later signed a record deal with Sony’s RCA music Records worth millions of naira. 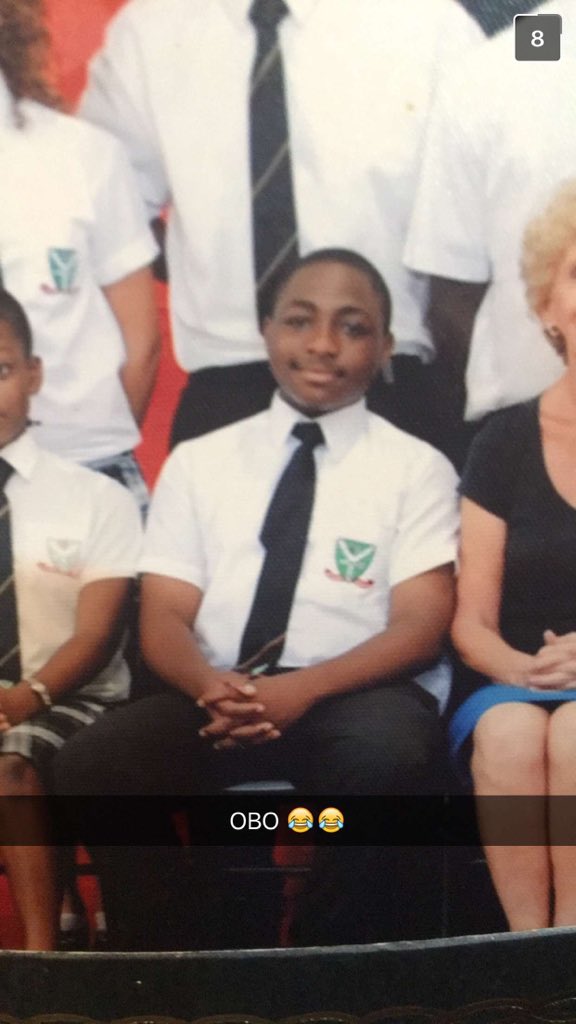 Davido who was born on the 21st of  November 1992 into the family of  Mr. Chief Deji and Vero Adeleke in Atlanta, Georgia. Davido’s father is a Nigerian business magnate and his late mum was a lecturer in a University.
Davido attended the British International School and studied Business Administration at Oakwood University before relocating to Nigeria. Davido’s hunger for music started all when he was back in the University of Oakwood, where he bought musical equipment’s and started making beats, in addition to recording vocal references, at the process he dropped out of Oakwood University because he couldn’t concentrate on his studies because music took almost his whole time. Finally relocating to Nigeria, where he started his musical career.
The superstar in a recent interview said his father sent Officials to arrest him for taking such decisions, without his consent.
At the process of paying more attention to music, he began having poor grades, later on, he relocated to London, where he focused more on his musical production. When Davido returned to Nigeria in 2011, Davido decided to pay less concentration to his musical hunger in other to honor his father’s wish. Davido’s father ever wanted his son to finish up his studies and this made him honor his father by enrolling at Babcock University, in July 2015 where he obtained his music degree from Babcock after his father paid the university to set up a music department class just for one.

The veteran superstar never stopped working, based on the work on his debut studio album titled “Omo Baba Olowo” which he began in the year 2011, he produced and at the same time released his first musical recording which he titled “Back When” On 7th May 2011.
The hit track was used as the album’s leading single track, which received steady airplay throughout the country. The music video for the single track was uploaded on YouTube on 9th May 2011, and based on research, the music video was directed in Nigeria by Clarence Peters.
However, the Musician told Factory 78 TV that his record hit “Back When” was recorded in London.  After on, the superstar went ahead to remix his hit track “Dami Duro” with another superstar, Shizzi which was released on 30th  October , then on the 8th of Jan, the music video of  Duro” was released  It was said to be directed in Lagos by Clarence Peters, which was released during the Occupy Nigeria protest.

Omobabalowo (as he’s fondly referred to), is one big proud daddy. Davido is currently dating Chioma, who he is proud to show the world. On Instagram, his girlfriend goes by the name, ChefChioma.
However, the crooner already has two Babymama’s, Sophie Momodu and Mandy.
This is a rare photo of Davido’s two baby mamas; Sophie Momodu and her daughter, Imade as well as Hailey and her mum. 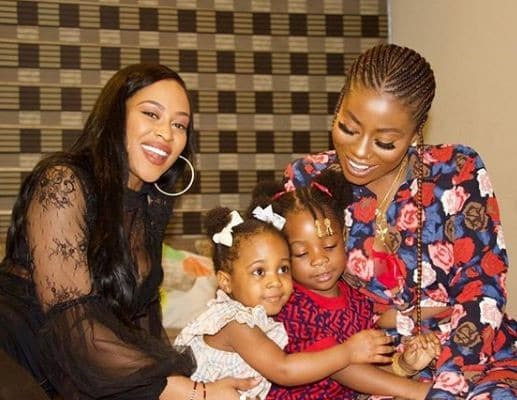 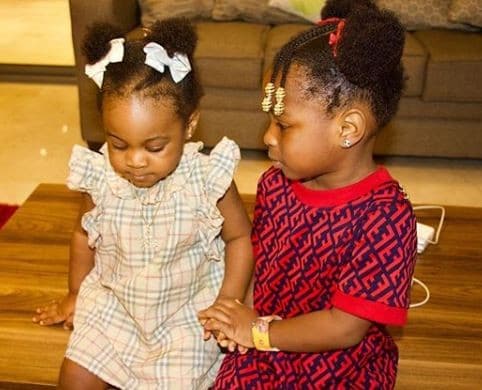 The Private Jet, House, Net worth And Cars Of Davido

It is quite unfortunate that many people don’t really know who Davido really is. Although it is unarguably truth that Davido is a talented musician around the globe, he is known for his amazing voice and Kind gestures towards the poor masses.
His real name is David Adedeji Adeleke. Davido is a versatile artiste and a record producer. Davido has kept on working very hard in other to elevate the musical industry with the mindset of taking the Nigeria Music industry to a greater height. Based on his hard work, he has so far, cooperated with various super stars in Nigeria, which names are, Uhuru, Sarkodie, Runtown, Ice prince etc.
Internationally, Davido has collaborated with world superstars as Young Thug and Rae Sremmund, Wale, Professor, Drake.
Davido never isolated himself from musical groups, which got him to the highest level of popularity when he released his hit track titled “Back When”. Davido is not only a musician, but he is also pretty rich because of the multi-million deals he signed with some amazing endorsement companies. Report has it that the Nigerian superstar owns classic houses, a private jet and fleets of expensive car which worth millions of dollars. Well, we are going to highlight the expensive properties which are been owned by this superstar davido. 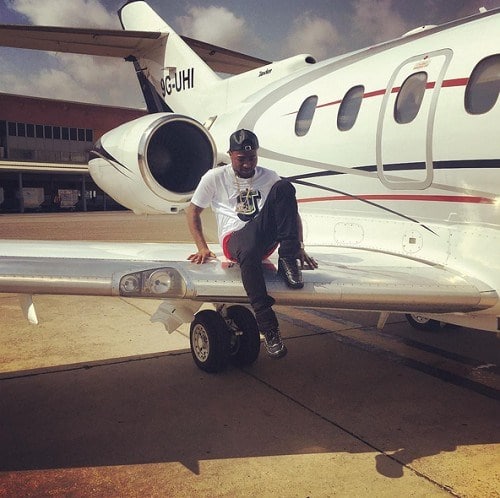 The Nigerian Musician can’t just hide his riches because it must be seen especially just because of his private jet. Davido never stopped posting pictures on his social media which made the world know little or more about his riches. Report has it that the private jet was offered to the Musician by his rich father because the famous singer had concerts in two different countries, so he had no choice than to accept the gift which was given to him by his father.
Although many journalists tagged the private jet to be the new super star’s flying toy, it was believed that singer’s plan was made known to the world through his pictures via his social media. 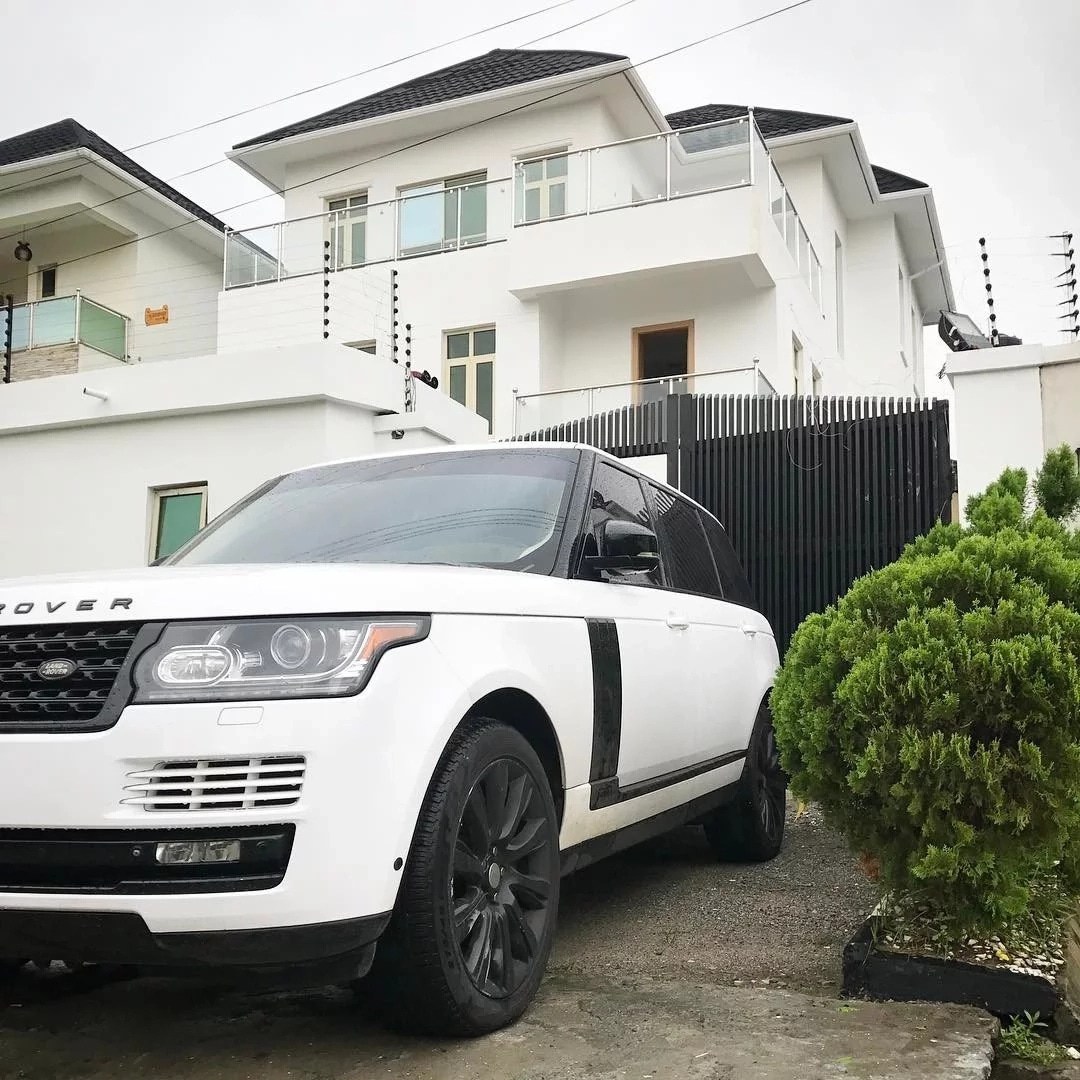 a few years ago, Davido built one of the most high-priced houses in Nigeria. Located in Lekki, Lagos State, very close to Don Jazzy’s House

Report has it that the born abroad Nigerian superstar davido started setting up his mansion many years ago, the veteran singer started the building project which was predicted to be one of the most expensive buildings in Nigeria. The house of the veteran singer is been tipped to be situated in Lekki Lagos state, the mansion of the superstar will also have granite countertops, rust proof steel appliances, and many more. 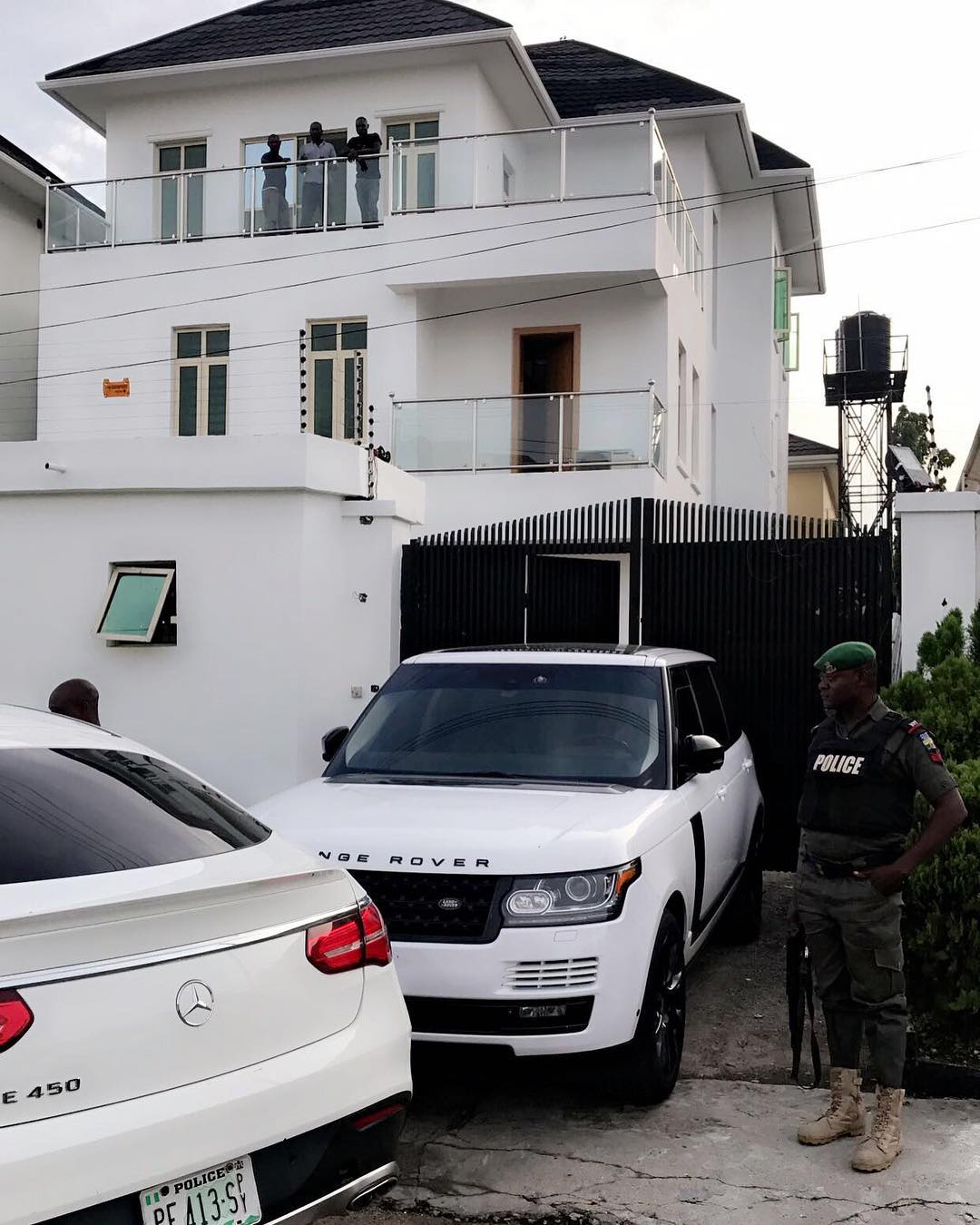 As long as money is concern, the musician has got no worries, because his building is said to worth over N40 million. Because of his riches, Davido was allowed and given the opportunity to own a super mansion also in Atlanta. Whenever he felt like taking a vacation, which He normally does, that is the mansion he uses over there in Atlanta, USA.

This aspect made many wondering on how he came to archive all this. Well, Davido is super rich, although he came from a well-known family which is said to be also wealthy. Report has it that the musician car garage has numerous classic and amazing cars which are all pretty expensive. Know it that Davido latest car is worth N20 Million Naira, and was a present he bought for himself on his birthday. 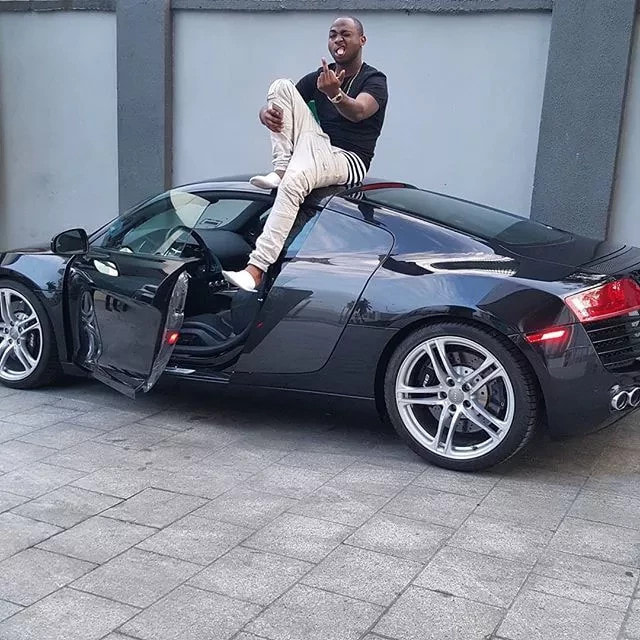 The Veteran superstar also has a Honda which is said to be sold at price tag of N4 Million Naira, Davido went ahead to purchase a clean Range Rover that cost over 20  Million Naira Rover,  and some other precious automobiles. As long as the earth remains, Davido is among the richest artist in the globe, because of the beauty of the cars, the news about his cars has been spread all over the country and the press tries to take photos of these amazing classic cars.

Let’s go down to the main business of the day as we take a look at the sum total of Davido’s wealth.
We cannot deny the amazing wealth of this superstar, and the release of his hit tracks which he titled “Omo Baba Olowo” made him started on the journey of his wealth gathering. It is believed that Davido net worth is said to be over ($16 million) towards the end of 2016, which was also boosted after he gained over 10 million views via his YouTube channel.
Analysts have released a report, which disclosed that for a million view on youtube, the owner of the Youtube channel makes the minimum, $3,000. Although this may sound big to you, it’s chicken money for Davido.
Davido’s songs, endorsement deals, and SHOWS, yes, Shows are his greatest sources of income. Although, the veteran superstar davido went ahead to add up to his riches with the profitable contract which he signed with record label and he also performs in the stage just as any other celebrity will do. Although, the superstar was born with a golden spoon because he came from a rich family of Elder Delhi Adeleke, and Veronika Adeleke respectively. He worked hard to make a name for himself which made him win more than 25 different awards and more than 45 nominations all to his credit.
In the just concluded 2017 Concert, the Musician claimed to have amassed 500,000,000 (Five hundred Million Naira)! and take note, this is ONLY from his 2017 concluded #30Billion concert.