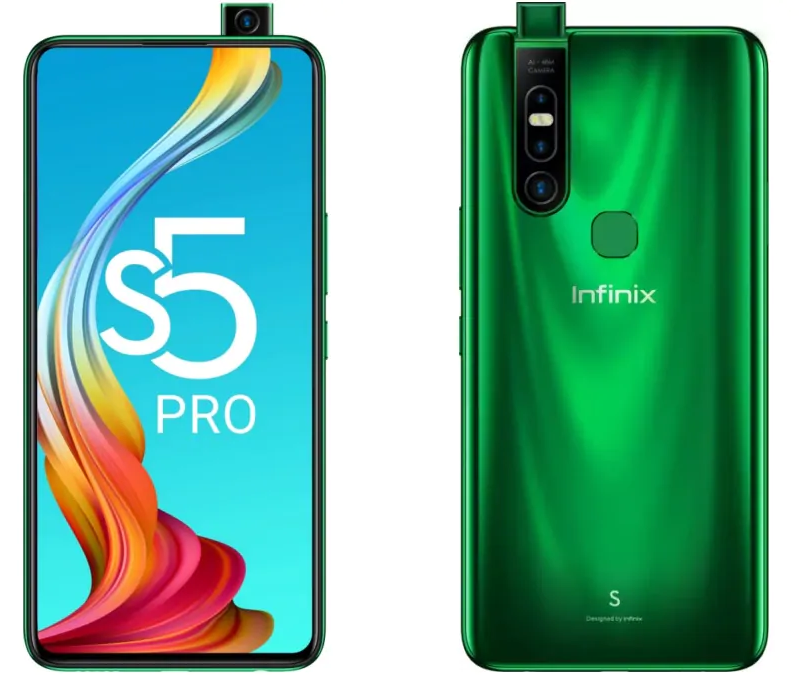 This is the Infinix S5 Pro review. The infinix s5 pro comes with different cameras, as their price rate differs too.

To ensure you have the complete package, when you open the box, you’re greeted with, the smartphone, take note that the infinix s5 pro device comes in violet color, Nebula Black and Quetzal Cyan. Inside the box, we have the warranty leaflet, an envelope that houses the SIM ejection tool, Xclub card, a film, a screen protector, and a clear TPU Case.

In the bottom compartment, we have a standard 10-watt charger, a micro USB cable, and a pair of earphones. On the front of this device, you have a 6.53-inch FHD Plus IPS LCD display with a 19.5 by 9 aspect ratio.

The motorized pop up houses a 40-megapixel selfie camera. We also have a blue LED that only indicates when a charger is plugged in.

On the back, you have a 48-megapixel triple camera setup with dual flash. You also have a fingerprint sensor and some infinix branding. On the left side of this smartphone, you have a 3 in 1 tray that house, is 2 4g/LTE nano SIMs and an SD card. While on the right side of the Infinix S5 Pro, you have a volume rocker and power button.

There is nothing on the top of this device, while the bottom have a speaker, micro USB port, a microphone, and a 3.5 mm headphone jack.

Take note that the Infinix S5 Pro shiny back and frame are made from polycarbonate material. It’s no lightweight but it’s not too heavy either.

The Infinix S5 pro device is a 2 handed use type of device but you can manage to navigate with one hand if you have average too big sized hands. We see some of the same design as the Camon 15 Premier.

The S5 Pro doesn’t have a notch or a punch hole and your viewing experience here is uninterrupted. Another amazing thing I won’t overlook here is that you can watch content in 1080P. Unlike Note 7 which is capped at 720P.

The S5 Pro is also bright outdoors under direct sunlight and is responsive to type on. The motorized popup camera automatically retracts when you accidentally drop it and, also when you try to manipulate it manually.

The Infinix s5 pro comes with a 128 Gigs storage variant with 6 gigabytes of ram. You get 116Gigabytes of available storage. This device is running on Android 10 with XOS Dolphin version 6.0.

The Infinix S5 Pro uses the Mediatek Helio P35 Octa-Core CPU clocked at 2.35GHZ and while it isn’t anything like the newer faster Helio G70 CPU on the Note 7, it will handle the average user’s everyday tasks without hanging or freezing.

Although the Fingerprint sensor used on the s5 pro isn’t the fastest in the world, and the same can be said for the less-secure, face unlocks, which of course has to pop that camera out first.

When it comes to gaming, the Infinix S5 Pro is amazing. While trying this device, I decided to run the PUBG on balanced graphics and medium frame rates, using the highest PUBG setting for this phone.

I discovered to my utmost surprise and delight that it ran smoothly, I didn’t expect or saw any frame drops or lag. Of course with this setting, enemies are more likely to do some damage before you even get a chance to fire.

On a comparison note, I discovered that the Infinix Note 7 has higher graphics than the S5 pro. The Infinix s5 pro is not built for graphics-intensive gaming.

The Infinix S5 Pro is powered by a 4000mAh battery. It took me 3 hours and 20 minutes to charge from zero to 100 percent. It does not support fast charging. This is one innovation I am expecting to see from Infinix phones in the nearest future.

The Infinix S5 Pro’s camera interface is quite the learning curve. Infinix used a wide-angle lens and removed wide-angle mode. Using the camera, you’ll also get the option to switch the selfie camera to 40MP, which means that the default camera is 10megapixel.

On the back you get 12 Megapixel by default which you can easily and quickly switch to,48 Megapixel for better selfies. For selfies, it may look similar in terms of output while looking at both at the small display. However, you see all of the differences when you crop all the way in.

The Infinix S5 Pro’s selfie is over 10megabytes large but that doesn’t necessarily mean it holds a candle to the 16megapixel shot of the Note 7. There’s no front-firing flash on this device. The camera is capable of recording videos in 1080P for the front and back camera.

The Infinix S5 Pro is definitely an upgrade from the S5, especially the camera output. It has some features that I wish the Note 7 did have.

However, there is something I’ve been disturbed and Infinix keeps disappointing me, it’s the USB type C charger. For me, I think the USB type C is long overdue.