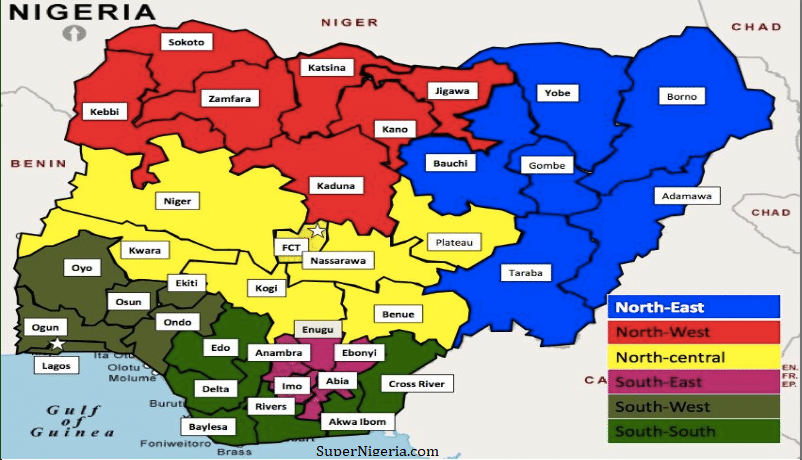 Nigeria LandMass by State: If you’re a Nigerian, then there is a need to know the biggest Nigerian state by LandMass and the smallest. Before proceeding, Here’s a related Fun Fact: The second (2nd) smallest state in Nigeria by LandMass is Anambra State.

Want to know everything about Nigeria’s state landmass? Then this article can become a source of extremely valuable information for you.

Nigeria geopolitical zones and States described in this image.

Before anything, you should know that the Federal Republic of Nigeria is divided into states (which is thirty-six (36) in total), including a Federal Capital Territory. All the states, in turn, has 774 Local Government Areas (LGA).
Although it is not official, the 36 states of Nigerian consist of 6 zones, namely:

Take note that the capital of Nigeria is Abuja. ABUJA has the status of Federal capital territory, though, and does not belong to any state, which means it stands on its own.

After Nigeria got her independence in the year 1960, Nigeria had only three regions, which are:

Seven years (7) after independence, which is in 1967, things started changing, the region was transformed into 12 States. Within a few years, Nigeria no longer has regions, but states.

While Niger state alone has an amazing landmass of 76,363KM². This means that Niger State landmass, covers the entire Southwest States, except Lagos State. Lagos state has a landmass of 3,345KM².
The entire Southeast is a little less than Kogi State only.

For your information, the smallest state in Nigeria by landMass is Lagos.

Lagos State is situated on the shores of the Gulf of Benin and Lagos lagoon, this city covers almost the entire territory of the eponymous state.

Although this state has the smallest Landmass in Nigeria, it consists of a large number of areas that are scattered at large distances and are connected by highways.

Another Fun Fact is that although it’s the smallest, Lagos State is the largest industrial and commercial center of West Africa, not just Nigeria alone.

Lagos state has the greatest density of population all over Nigeria, which means it’s overpopulated.

The second smallest state in Nigeria is Anambra.

Anambra is a state located in Southern Nigeria. By LandMass, Anambra is one of Nigeria’s smallest states (35th place out of 36 states).

The administrative center of the state is the city of Awka, which is also the Capital of the city. The major cities of Anambra are Onitsha and Nnewi. The state is named in honor of the river, Anambra.

This may be surprising to many people, especially Citizens of Nigeria who thought they know better. Kano is the second most crowded state of Nigeria and is the economic center of the Northern part of Nigeria.

Kano state is a major trading center of cotton, cattle, and peanuts. The best place to buy extremely high-quality leather and dyed goatskin in North Africa is Kano state.

Most products from the state are taken to Europe, where such materials are called Moroccan leather. Kano state land mass is 20,131 km2.

Kwara is a state in Nigeria, while Ilorin is the Capital. This state is situated 306 km to the northeast of Lagos and 500km southwest of Abuja.

Kwara state landmass is 36 825 km2. In comparison to other states in LandMass, Kwara is the 9th largest state in Nigeria.

Ibadan is a city which is located in the south-West region of Nigeria. The Capital city of Oyo state. Ibadan is the third-largest city in the country in terms of population, taking third (3rd) position after Lagos and Kano.

The number of population in Ibadan are more than 2.5 million residents. It is mostly inhabited by the Yoruba nation.

FCT Abuja is where Aso Rock is, the official residential Area of the Nigerian President and government, political-administrative and cultural center of the country.

The decision to move the capital of Nigeria from Lagos to Abuja was made in the year 1976. However, Lagos state, which is the former capital of Nigeria, remains the major economic center of the country even after the Capital was removed.

Abuja has a population of about 778 567 inhabitants, which is increasing at a very fast rate. Abuja is situated within the area of the Federal Capital Territory. Abuja’s landmass is 1,769 km2.