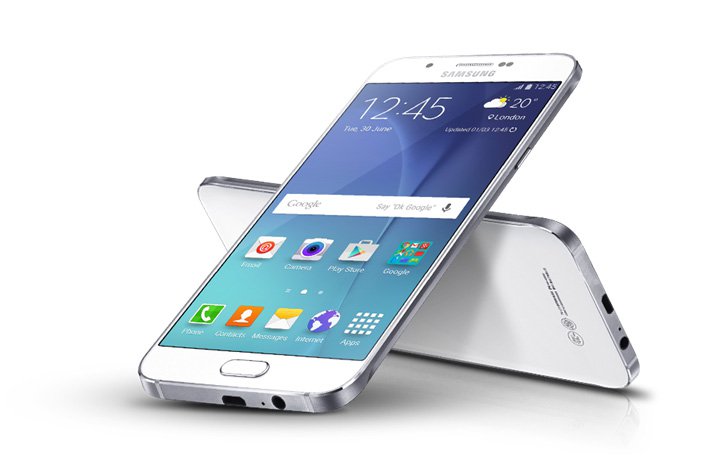 This smartphone came with an Exynos 7420 SoC, which consists of 4 ARM Cortex-A57 and 4 Cortex-A53 backed by the Mali-T760MP8 GPU and a 3GB of RAM and 32 GB internal storage, which can easily be expanded by inserting a MicroSD of 256GB. Now, the slot where you can insert the MicroSD memory card to expand your storage space, can also be used to insert a second Nano-SIM (in international versions), this means that you’ve got one option, either you used the slot for MicroSD or insert a second simcard. This smartphone comes with a non-removable battery like its predecessor, and a 3500mAh battery with Fast Charging technology.
The Galaxy A8 2016 model also features a fingerprint scanner. The fingerprint scanner is used for unlocking the phone, and is also used to Samsung Pay with NFC and MST communication technologies

The Samsung Galaxy A8 (2016) runs on the Android 6.0.1 “Marshmallow” and come with a UX interface, which was first introduced in the Galaxy Note 7.  This device also features a new “Always On display” functionality, which displays a clock, calendar, and notifications on-screen when the device is in standby, which is similar to Samsung Galaxy S7, S7 Edge.

In Camera, Samsung did not disappoint users, as the A8 features a better 16MP (megapixel) back camera and a 8MP (megapixel) front shooter for selfies.