Tecno is relentless in ensuring that their users get a different type of smartphones that may suit their need and pocket in particular. I don’t know if which series the Tecno F falls in if there will be anything like the Tecno F series, since we now have the Tecno F1, F2, F2 LTE, F3 (which is this one here) and F3 pro.
The Tecno F3 was unveiled recently in the Spring Launch and is the successor of the Tecno F1 and Tecno F2 smartphones. For the fan of the Tecno F series, take note that there is absolutely nothing like an F1 pro, F2 pro, but there is an F2 LTE. Its the F3 however, that comes with a pro, and I guess all other subsequent releases will be coming with their pro or LTE version.
Just like all other smartphone does, this F3 would be the one that offered the best specs and features of the trio, but the only problem here is that the price will be costlier than the F1 and F2.
One amazing feature I noticed for a midrange smartphone like the F3, is that this device comes with the latest 18:9 aspect ratio and lots of features, which may swoon Tecno fans worldwide, off their feet. 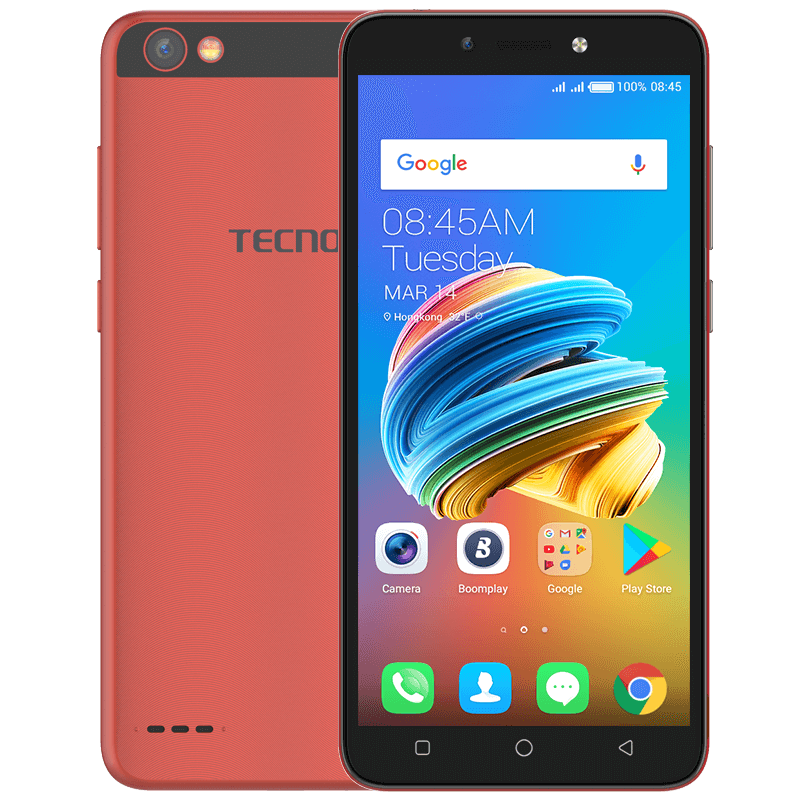 Tecno F3 at a Glance

Here is an overview of what the Tecno f3 is bringing to the market. This overview gives you a complete rundown of the features offered by this device.
Here on Techopera.com, we do not expect very much from a device that is produced into the Midrange market. However, the Tecno F3 is actually fascinating and intriguing. Coming with a 5.5-inch screen size, and a resolution of 960 x 480 pixels for good display, this phone quickly got our full attention.
For a midrange device like this, you should not expect a bezel-less screen. However, we are super amazed at the design of this device. Tecno surprisingly managed to add bezels on the top and bottom of the screen, making this device a complete favorite among the Tecno F series we’ve come to see yet. For the top bezels, the ambient light sensor, earpiece, and 5MP selfie photo shooter makes it to the front of this device.
To me, the only thing that makes this phone look like a midrange device is the selfie flashlight that Tecno put on the front. Although this flashlight is wonderful for better photo capturing in dark places, it’s outdated. However, for a device which is under $90 USD, there should be no complaints at all.
Looking at the back of this device, we’re welcomed with a plastic covering. The good news about the Tecno F3 rear is this. The plastic used in covering the back of this device did come with better aesthetics than the ones used on the F1 and f2 Tecno F series.
Looking at the top of the plastic, you get to see the horizontal setup of a camera, which is 5MP and its own LED flash. Am surprised at this design and to be very honest, Tecno could have done better. I was expecting the F3 (pop 1) to have packed a bigger sensor for the main camera.
Looking at the inside of this device, and the boss at the helms of the affair here, we get to see that the F3 pop 1 comes with 1GB of RAM on 8GB of storage. Personally, 8GB of storage is quite low, I love watching Movies in my free time. But to make up for this, Tecno added a dedicated Micro SD slot, where you can insert a memory card, maximum 32GB.
This device does come with a quad-core processor that can clock as high as 1.3GHz when tasked to the maximum. The F3 runs on the Android 7 Nougat.
While in the power sector, this smartphone comes with a 2400mAh battery, which is non-removable.

The Tecno F3 is truly an affordable device and is available Nationwide. The price of this device is around N25,000 naira – N#27,000 naira.
At the launching ceremony of this device, the price ranges from $89 – $90. Important Note: Please be informed that the price above is calculated based on the values obtained from the current exchange rate.

I love this smartphone, and the specs it features is truly wonderful. I’ll rate this device 3.5 out of a 5-star review, why? Because this device did not come with an availability of the 4G network, lack of bigger sensor for the main camera and the flashlight, it’s outdated.
Apart from this, everything else is worth the price.