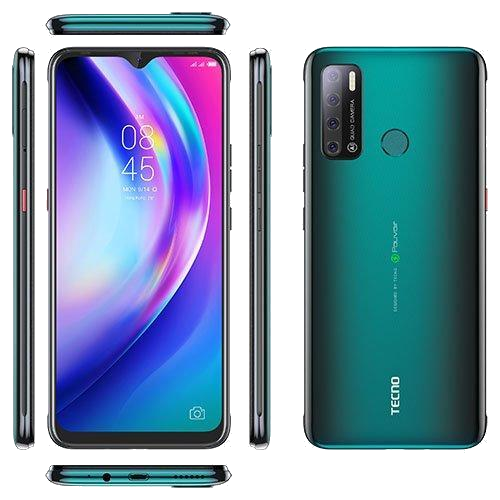 The Tecno Pouvoir 4 Pro device is the latest Pouvoir smartphone from Tecno Mobile. It is the successor of the Tecno Pouvoir 3 plus, which was launched almost the same month in 2019.

This device comes with an amazing 7.0-inch wide display, making it another big screen device from the company. It comes packed with more RAM, bigger storage, a faster processor, and lots more. The device is equipped with a 6GB RAM and 128GB ROM and runs on Android 10.

I’ll recommend you check out the Tecno Camon 15, which comes with a better screen resolution, but it’s a bit expensive than the Pouvoir 4 pro.

In the power section, the Tecno Pouvoir 4 Pro has a monster battery, and it’s a huge 6000mAh battery that supports 18W fast charging. For some countries experiencing low to no power supply, this should be it’s highest selling point.

In this article, we will be covering the features, specifications, and price of the Tecno Pouvoir 4 Pro. Then you will decide if it fits your choice of phone.

Features of the Tecno Pouvoir 4 Pro.

Looking at the design of the Tecno Pouvoir 4 Pro, it is quite clear that it is almost the same with that of its predecessor, the lesser Tecno Pouvoir 4. They both have an identical design that you might be forced into mistaking one for the other.

They both also have the same rear setup that looks like that of the Tecno Camon 15. In this case, there is a square camera module carrying quad cameras and a flash. It also features an optical fingerprint sensor and the Tecno branding which shows that it is a product of the Tecno Company.

The Tecno Pouvoir 4 Pro is equipped with a large 7.0 inch IPS LCD display in the front, and a screen resolution of 720 x 1640 pixels, which is old when compared to modern devices like the Samsung Galaxy Note 20. It is a little bit of downgrade on the display features of the Tecno Pouvoir 3 Plus, which comes with an AMOLED display.

The Tecno Povouir 4 Pro cameras are an upgrade to both the Tecno Povoir 3 plus and the less premium Tecno Pouvoir 4. It has more amazing cameras that are capable of improving smartphone photography.

On the rear, it has a 16MP primary camera, 5MP, and 2MP secondary cameras. It also features a low light sensor, which helps in the improvement of photos taken in the dark. The Pouvoir 4 camera setup is also good at taking photos in HDR and videos up to 1080p 30fps.

It has a single 8MP front-facing camera, for selfies, which is very bright thanks to the dual-LED flashes which contributed immensely to that. It can also be used for video recording.

The Tecno Pouvoir 4 Pro’s most important and stronger point of its features is the massive capacity battery of 6000 mAh. This is a feature that is mostly associated with the Pouvoir 4 series Smartphones, in the sense that it provides more capable hardware that makes you appreciates its battery more.

There is also the absence of the quad-core processor we saw on the Pouvoir 4, and instead, the Tecno Pouvoir 4 Pro went for an Octa-core MediaTek Helio P22 processor. It also comes with a 6GB of RAM and 128GB of internal storage with an option for storage expansion up to 256GB via SD-card, for lovers of multiple downloads.

As for the Software, the Pouvoir 4 Pro has a HIOS 6.1 user interface running on the Android 10 operating system, which is the same as that of its predecessor.

Internet connectivity on the Tecno Pouvoir 4 Pro is capped at 4G LTE, due to the fact that the 5G support is not there. But, that is not to take away the fast nature of its networking system.

We have also provided below the key specifications of the Tecno Pouvoir 4 Pro Smartphone, which will clearly assist you in your decision making in purchasing it.

The Tecno Pouvoir 4 Pro price varies, depending on your country or location. But one thing that is sure is that it is no longer a rumor, for it has been confirmed available in almost every country, and can even be found in the nearby phone shops around you.

In Nigeria, the price is believed to be affordable at the rate between 65,000 to 70,000Naira, which is the equivalent of $165 to $172, depending on the value at that particular time of purchase and how the economy works.

Moreover, you can also place your order from anywhere you are, including any online shop, and it will come directly to your doorstep. Nevertheless, stay with us as we continue to update you on the latest information on captivating Smartphones and Tech devices and news.